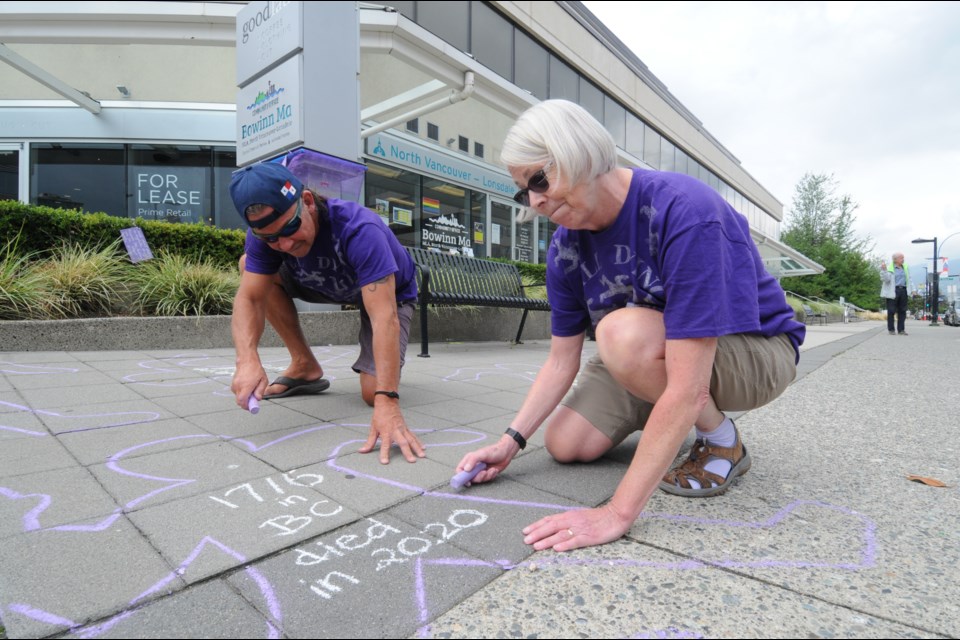 Purple chalk markings resembling forensic body outlines will be drawn on the pavement outside politicians’ offices in North and West Vancouver this weekend.

Each outline to mark one of the many lives lost to British Columbia’s ongoing opioid crisis.

The stark visual reminder, set to coincide with International Overdose Awareness Day on Aug. 31, is being led by North Shore members of Moms Stop the Harm (MSTH), a nationwide group that aims to change failed drug policies and offer support to families.

Bereaved North Shore father Matthew Witt will be one of the members drawing chalk body images outside politicians’ offices come this Saturday (Aug. 28).

Witt’s son Sebastian had been clean for over a year before he died, after having a relapse at age 20 on May 18, 2015. Witt strongly believes the shame surrounding addiction hindered his son from asking for help when he needed it most.

He shared how his son died after taking a toxic supply of fentanyl in the lead-up to B.C.’s five-year overdose crisis anniversary on April 14, in a bid to advocate for policy change and to help shake the negative stigma surrounding drug addiction.

Witt is hoping the campaign, ‘We’re Still Dying … Do you See Us Yet?’ will help put the crisis back in the spotlight and spark conversations to help reduce the negative stigma which surrounds drugs.

“We just want to bring more visibility to the opioid epidemic,” he said.

“It was declared a public health emergency five years ago, but those are just words. We want to see some action, primarily a safe supply of drugs to keep people alive so that they can look at treatment options afterwards when they’re in a better state of mind.

“We can’t help anybody if they’re dead.”

Since B.C.’s opioid crisis was declared by Dr. Perry Kendall, B.C.’s former provincial health officer, in 2016 there have been more than 7,000 illicit drug toxicity deaths. In 2020, toxic drug supply claimed more lives than ever before in the province’s history, with 1,724 deaths.

Things have not improved this year, with hundreds more deaths. In May alone, there were 160 deaths. That’s more than five people dying per day.

Heartbreaking national data further emphasizes the severity of the situation, with 21,174 apparent opioid toxicity deaths between January 2016 and December 2020.

Fellow MSTH member and North Shore resident Jennifer Cooper will be by Witt’s side, chalk in hand. The 68-year-old knows all to well the pain the loss of a family member to illicit drugs can cause. Her younger brother Paul died Dec. 6, 1996, of “an intentional cocaine overdose” on the eve of his 40th birthday.

“That was 25 years ago, OK, and I still feel empty because he’s not with us,” she said.

While her brother did not die from a toxic supply, Cooper joined MSTH for support and to help raise awareness after watching her talented, smart, good-humoured, loving brother struggle for many years to overcome his addiction and the shame he felt, until it was all too much for him.

She said this weekend’s campaign was “an opportunity to think about the number of people who are dying from the poisoned drug supply,” to help educate people about the crisis and to put pressure on the politicians who can help make a difference.

“It is the politicians that need to make this change,” Cooper said.

In April, to help address stigma, Sheila Malcolmson, Minister of Mental Health and Addictions, announced B.C. would officially request a federal exemption from Health Canada to decriminalize personal possession of drugs in the province.

While Witt is in favour of the decision, he says action is still taking too long.

His message to local politicians is, “Let’s get the Section 56(1) exemption going.”

“Let’s take action now and stop putting it off,” he said.

“Through provincewide decriminalization, we can reduce the fear and shame that keep people silent about their drug use, and support people to reach out for help.

“I understand that the COVID pandemic has taken a toll on everybody and changed everything, that’s completely obvious, but it doesn’t mean we can’t do anything about the opioid epidemic as well.

“It’s killed more people than the COVID epidemic, and hopefully we can address this with the same urgency.”

Purple chalk body outlines are also expected to be drawn at other politicians’ offices in Metro Vancouver by other MSTH members.

International Overdose Awareness Day was initiated in 2001 by Sally J Finn at The Salvation Army in St. Kilda, Melbourne, Australia. It has become the world’s largest annual campaign to end overdose and to remember without stigma those who have died and to acknowledge the grief of the family and friends left behind.

MSTH will also be holding a livestream Facebook Candlelight Vigil on Tuesday, Aug. 31 at 6:30 p.m. The event will be an evening of music and words of remembrance featuring guest speakers Lisa Lapointe, B.C. coroner, Dr. Jennifer Charlesworth, B.C. representative for children and youth, and Leslie McBain, co-founder of MSTH.

Elisia Seeber is the North Shore News’ Indigenous and civic affairs reporter. This reporting beat is made possible by the Local Journalism Initiative.